Mt Antero is one of only a handful of 14,000′ peaks that has a road that travels to within a short distance of the summit.  The road up the mountain is difficult, rough and rocky, requiring four-wheel drive, eventually topping out at 13,800′. From the end of the road at point 13,800 it’s a 1/2 mile and 470′ scramble to the summit.

In 1881, a Salida man by the name of Nelson Wanemaker discovered gems high on Mt Antero. His discovery was publicized a few years later, and the mountain became a famous collecting area for aquamarine, phenacite, fluorite, topaz, and smoky quartz crystals. It has the highest concentration of these minerals anywhere in the US. With findings far above timberline, this is the highest known gem field in the lower 48.

The Sawatch Mountain Range is home to fourteen other 14,000′ peaks, such as Huron Peak, La Plata Peak, Missouri Mountain, and the highest peak in the Rocky Mountains, Mt Elbert. 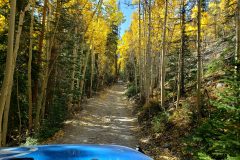 Continue another mile to tree line as it climb’s Mt Antero’s west slopes. Stay left on 278A at the next 2 junction’s, reaching 13,200′.

From 13,200′ to 13,800′, the road becomes extremely steep with hairpin
switchbacks. You may want to consider parking here as most vehicles
wont make it. Continue up the steep south side to reach the end of the road, Point 13,800′.

This site uses Akismet to reduce spam. Learn how your comment data is processed.